Paramount, But What's The Plus?

When I blogged about “cancelling Netflix” I said I would post an article comparing streaming services in Canada and… well I didn’t. And I’m sorry. Rather than a single article though I thought maybe separate posts and a summary article would be best… so here I am with the first in that series; Paramount+.

Paramount+ is the rebrand of what was originally CBS All Access. Following the merger of CBS and Viacom the service was rebranded as Paramount+ and includes content from the CBS Entertainment Group, Paramount Media, as well as Originals produced exclusively for the streaming platform.

Paramount+ is available in multiple countries around the world, including here in Canada.

Paramount+ has support for a number of devices. 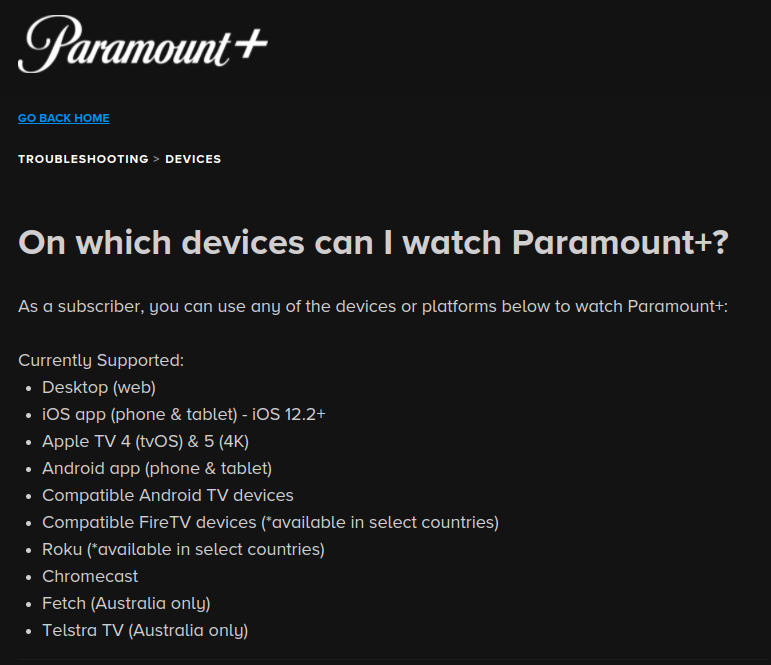 I’m not going to do a review of the experience across multiple devices for a couple of reasons.

First, I don’t have access to most of these devices and secondly, I only stream content via the web app anyway on all the streaming services I use. This is less of a review on specific device interfaces and more generally about the service overall anyway.

What I can tell you is that streaming via the website in Google Chrome on Ubuntu 20.04 works flawlessly, with no weird quirks or gotchas.

I can’t remember any specific settings for the video quality in the web app and my 7-day free trial is now over so I can’t check, but I’m pretty sure the quality was 1080p by default on most titles. I would like to think that a streaming service in 2022 would not offer anything less than 1080p streaming…. but then there’s Crave in Canada which only does 720p so… who knows really?

I don’t know what content is available in other countries, but in Canada the answer is… not much unfortunately. There are 51 TV shows and 61 movies. How do I know this? Because the content library is so sparse I was able to quickly count.

Available TV shows consist of both “cable TV” shows and Paramount+ Originals. If you enjoy watching various flavours of shows like CSI, FBI, or NCIS, you’ll be happy here. Otherwise you have a few Originals, a few things from CBS history (Sabrina The Teenage Witch, The King of Queens), and some more recent reboots (MacGyver and Hawaii Five-O). 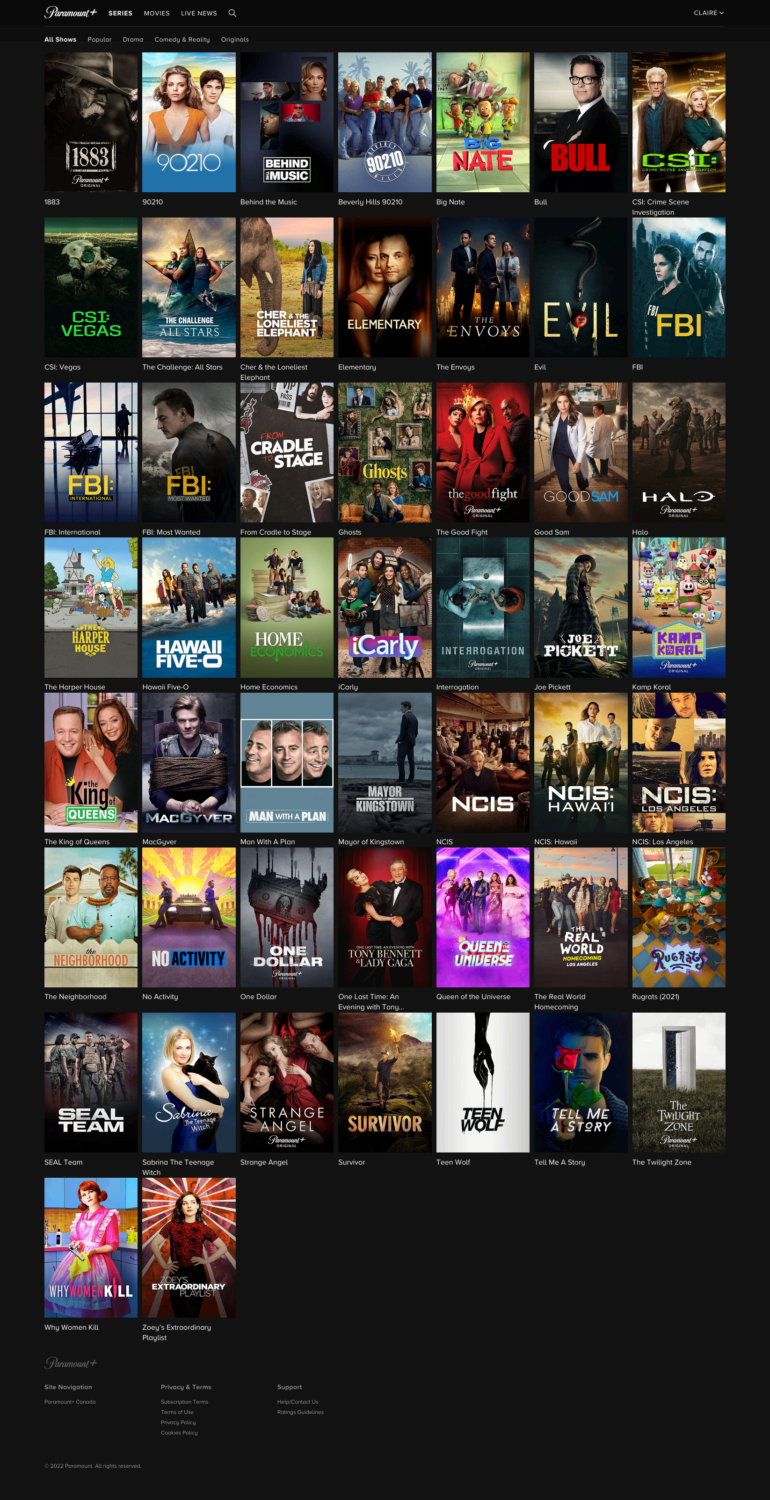 I had a 7-day free trial, so basically I binged the 13 episodes of the iCarly Original and that was it. Most of the other shows didn’t really interest me.

Well my good reader, here in Canada Star Trek doesn’t exist on Paramount’s own streaming service because Bell Media owns the exclusive rights to the current and past Star Trek library for Canada. These are available for streaming via their own streaming platform called Crave.

I mean that’s great because it means I still get to watch Star Trek Lower Decks, Star Trek Picard, Star Trek Discovery, and hopefully the upcoming Star Trek shows too as they come out without having to resort to more shady means, but it’s also Bell. And Crave. And that’s annoying : (

In terms of movies you can pretty much watch Tom Cruise, or “classic” movies from the 80’s, 90’s, and early aughts. Seriously, of the 61 available movies 11 of them feature Tom Cruise. Granted 5 of these are in the Mission Impossible series but still. 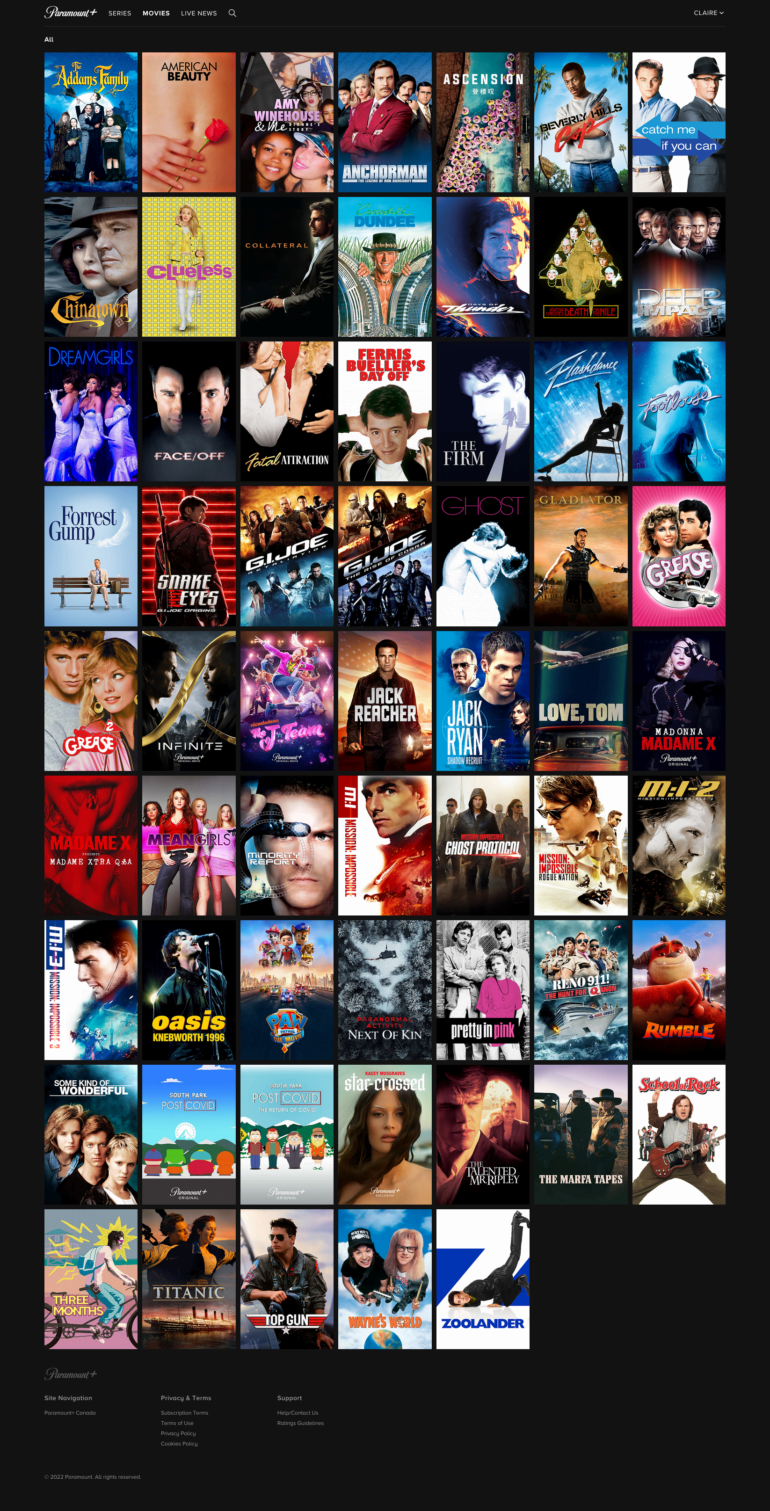 If you’re a fan of classics though, it’s a pretty decent collection if you’re looking for some nostalgic watching, including:

I basically only used the Movies section to identify a couple of movies I wanted to buy to add to my Blu-Ray collection (Collateral and School Of Rock).

The user interface is what you would expect from a streaming service in 2022. It’s very much like the web interface for Netflix or Disney+ and also pretty smooth. There’s not a lot of lag or “clunkiness” being experienced while you’re navigating the categories (once again looking at you Crave).

Paramount+ does, however, have a bit of a ways to go to polish up their user experience. For instance there’s no memory or history of the shows you watched. That means there’s no “continue watching” category, no easy way to see what episode you left off on, and no way to stop on one device and resume on another.

The “My List” option is also only half-baked. You can add titles to “My List” but there isn’t a dedicated menu option to see your list. Instead you need to scroll down the main category page until you find the title under the “My List” category.

I know it’s probably a case of the “move fast, get things out and improve them later” mentality, but these features should be pretty standard for a streaming service today. 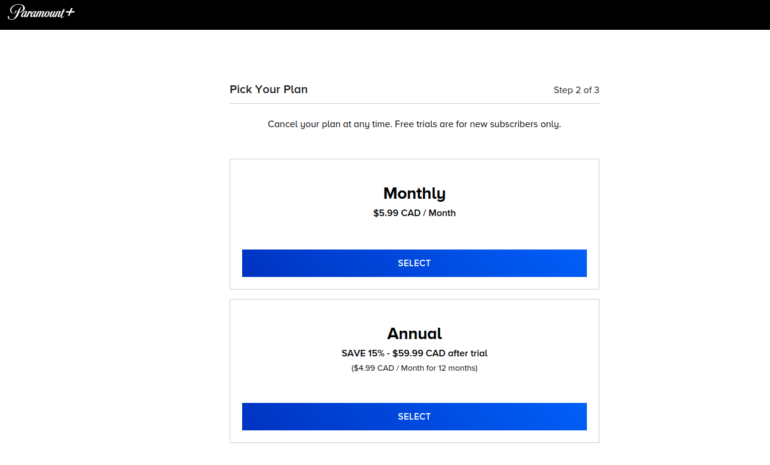 I mean it’s not BAD pricing as far as streaming services goes… but for the content available that price is way too steep for me. The existing content library is so barren I might (and that’s a heavy “might”) be willing to pay $0.99 or $1.49 per month MAX, but $5.99 is out of the question for what they’re currently offering.

Paramount+ is not there yet for me to use as a streaming service, but I think it does have potential. I would definitely reconsider it in the future if/when they add far more content to the library, or if/when Bell no longer has the exclusive rights to Star Trek and I can only watch the newest series' through Paramount+.

YOU MAY ALSO LIKE...
TAGGED IN
Streaming Cord-Cutting ParamountPlus Crave